The NSWCFA has held the first of what we plan to be regular Zoom sessions about projects and people involved in freshwater fishing in NSW. The first of these was on 23 March 2021 with Dr John Harris discussing his tube fishway concept. 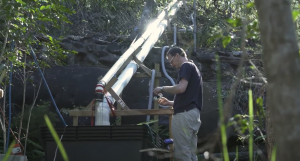 Dr John Harris is a former Principal Research Scientist who led NSW Fisheries’ freshwater research group. He is now an Adjunct Associate Professor at the Centre for Ecosystem Science at the University of NSW. He recently retired after 21 years as a consultant to a number of government and industry bodies, especially the Murray-Darling Basin Commission. The restoration of migratory fish passage at artificial barriers such as dams and weirs is now his main area of interest—his PhD was a study of the Australian bass, and he has consulted to a number of organisations on fish passage projects, including dam-building companies and various government agencies.

Dr Harris started working on the idea of a tube fishway around 2006. Basically, it is a simple, naturally-powered device which can move fish up and over barriers. It is hoped that field trials for the concept will commence shortly, subject to availability of funding. The licence money in the NSW Recreational Fishing Trusts was one of the sources of funds for earlier stages of the project.

To view the recorded Zoom session go to this link.